May 28, 2021
Few years ago on a fine day I have decided to take my father to the bajaj bike showroom which is in my native. I had no idea what bike to buy. All Indian parents will never give us a chance to buy our first bike as we wish but that whatnot that their thoughts, neighbor and relatives will twist their mind and their thoughts like don't buy and give him a higher cc bike, I have seen your son riding bikes in an aggressive manner on roads, but the fact is I don't know to dive a geared bike then how can they see me riding rash? Bull shits.
I finally convinced my parents to buy a bike with at least 100cc for God's shake and they agreed because we have a Bajai M80 at our home commonly called "The Load King", now you know why they agreed from 80 to 100 is not a drastic change right?
So on another fine day of the same month I took him to the same showroom and showed him a pulsar 150, the sales guy ruined the plan and told the Cc and specs about the bike all collapsed, then the same guy showed us the discover 100 I was not satisfied with that old model because the design was not attractive, again he showed us the new model discover 100M which was launched on 2014. It was pretty good when compared to the old model, so I have decided to take that bike, but we asked for blue color but that was not there so we decided to go with red and black, After all the payment was done we ready to go, but the twist we don't know to ride a geared bike, sudden sparkle came to my mind and called my buddy " Tamil" and said I bought new bike man, but I need your help to take it home. 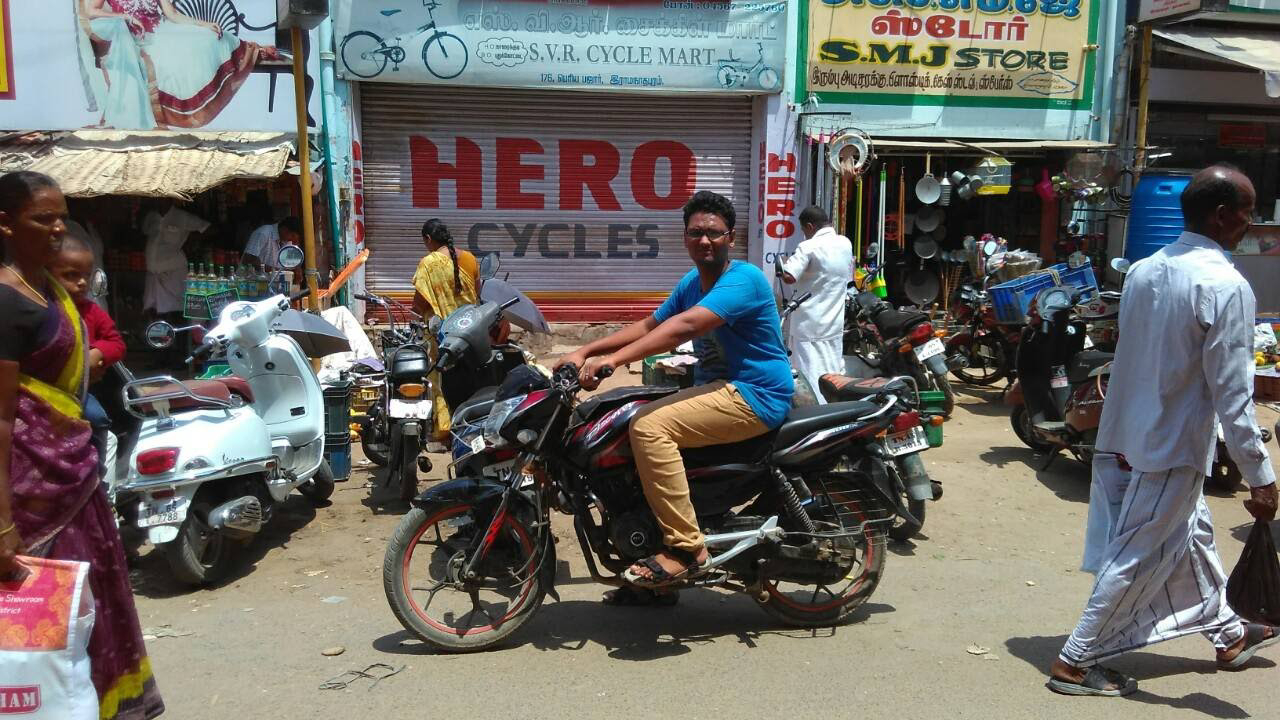 After 30 minutes he came to the showroom and looked at me and laughed 😅 I too replied to him an ugly smile. We parked his bike at the showroom and me and him went on the new bike to my home to show the bike to mom and brother. Later that night with the help of my buddy learned few basic things about the bike and learned to ride it on a single night.
A few hours later I dropped at the showroom on my old bike and happily returned back home. Then my father decided to learn at the same night I thought him how to ride it and we figured it within few hours how to shift gears properly and how the accelerate works. While returning home the clutch wire has been damaged on the first day itself. Then we went to a nearby mechanic shop and fixed the issue and we returned back to home.
This the story about my first bike. Feel free to comment on your favorite moments with your new bike.
"Four wheels move your body two wheels move your soul"
Happy riding.

Popular posts from this blog

June 09, 2021
On June 1st Central Government (The Ministry Of Road Transport And Highways) has banned the non-ISI helmets but why? They are claiming by there are more than 56,000 accidents happens because of non-ISI helmets. Most of the brands like Axor, LS2 , AGV are DOT, ECE certified and they are used for racing too and they have the international standards for it too. These helmets brands are more popular than the ISI-certified brands.  Most bikers and motorcycle enthusiasts prefer only these types of helmets because of safety features. Am not blaming the ISI-certified helmets but DOT and ECE certified are more preferred by all. We have popular brands like Vega , Studds are ISI certified brands in India. If the person rides using the other certified helmets rather then ISI certified means they can be fined from 500 rupees to 5000 rupees accordingly, but if you ride without helmet only 100 just joking 😜. If a seller sells an non-ISI-certified helmets means they will be fined up to 5 lakhs and
Post a Comment
Read more

May 30, 2021
The Dream Bike      Years went passing by using the discover 100 for more than 5 years, there are some inner feelings that I need a higher cc bike to reach the destination place a little bit early, and  adrenaline rushes sometimes to feel the speed of the bike. I didn't say that the speed of the Discover in not much slower somehow I needed much power and some offroading capabilities because of the Indian roads.     While in the thought of changing the bike my discover saved me from several crashes and accidents. I'll explain one incident that happed a few years back. I was at a speed of 60Kmph on a curve I thought of taking cornering at the training situation and in a slippery road on a fine rainy day moring while returning back home. I bent the bike totally to the left side of the road it ended in a crash. the left side of the leg is totally worse and the upper skin was fully damaged and the road full of blood. I don't know what to do at that situation some peoples gathere
Post a Comment
Read more

The Peripatetic
Hi all, welcome to my blog. I'm a traveler and motorcycle enthusiast.