My First Long Ride on Himalayan

July 08, 2021
My very first long ride on a bike was to Chennai with my pal Tamil.
The ride was a very sudden plan, I was in Madurai to check my mother's health, the check-up was over before the noon of the day I thought It may take longer.
While returning home in the car, I was bored and started a conversation with Tamil through Whats App, as the checkup was done so quickly am returning shall we meet up somewhere?
Then he questioned all of sudden shall we go to Chennai as a small trip for this new year? I said why not!
But the thing is by how we are going? I had a plan to take my Himalayan for a long ride. Then convinced him and my family to have a trip on the bike to Chennai.
These all things happened on a gap from hospital to my home. I reached home nearly by 4 PM and had a little nap then I was ready for the trip with lots of excitement.
Prepared my bike for a ride by lubbing chains and checking out the air pressure on both tires and tie-up my luggage on a carrier. Then I left home by 5.30 PM to Tamil's home.
Now there's a twist Tamil conveys to his family that he is travelling by car but I was on a bike riding suits in front of his home. Then we convinced his parents and picked up his luggage and set it on the bike.
Finally, the trip officially starts!
Before this trip, we had a plan to visit Kodaikanal, but that trip was spoiled by one of my pal Yogesh, that was a very sad and irritated moment the total day was spoiled.
So i was decided to have a short or long trip and finally that happened. I was so depressed in this lock-down by doing nothing.
The ride now officially starts, I used to always fill petrol on Bharath Petroleum stations, but I don't know why, filled my tank in Ramanathapuram itself and started via ECR.
While riding wee started to discuss what things can we do there at Chennai and we don't know how they are being safe in this Covid season.
First few Kilometres is used to ride until karakudi then Tamil started to ride after that. We had no plan what to do in Chennai and we had no plans further too. first break we had near by the R.S Mangalam because the luggage was not tighten much it started to fell.
After that we started riding again and had a second break before Karaikudi on a Tea shop and we received a call from Ruban and we told that we are on a trip if you wish or you have a leaves can come and join with us in Chennai.
Then we started riding again we took the shortest route to Chennai via Karaikudi- Trichy- Chennai.
In this ride at starting itself i learned that we should to take night rides because we face lot during night rides, like while riding can fall as sleep or mood swings and illusions.
After lot of struggles we started to think that we are not able to ride further and Tamil questioned me that can we take halt in Trichy and continue ride at morning but I was very confident that we can complete the ride.
We took breaks on petrol stations every 80 to 100kms we took a break and we exchanged and ridden finally to trichy.
Until trichy the road was little bad condition and in some places they where under constructions too. 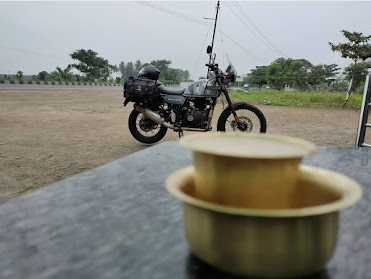 After trichy the road was so good kinda like a high way, so we increased the speed and we reached chengalpattu early morning, then we had a coffee break.
After that break we rode continuously to Chennai, the we took a break near sholinganallur and we reached home by 8 AM in the morning. Our room was locked up for more than 6 months, we cleaned one room to take rest. we haven't had breakfast and slept for few hours.
The we ordered our favourite food on Andhra Mess and the recipe name " Cashew Briyani", the food was totally ultimate and we slept again then by the evening we went to a tea shop and has "Ginger Tea"
after a year that was totally ultimate.
that's the end of the ride and end of this blog.

Popular posts from this blog

June 09, 2021
On June 1st Central Government (The Ministry Of Road Transport And Highways) has banned the non-ISI helmets but why? They are claiming by there are more than 56,000 accidents happens because of non-ISI helmets. Most of the brands like Axor, LS2 , AGV are DOT, ECE certified and they are used for racing too and they have the international standards for it too. These helmets brands are more popular than the ISI-certified brands.  Most bikers and motorcycle enthusiasts prefer only these types of helmets because of safety features. Am not blaming the ISI-certified helmets but DOT and ECE certified are more preferred by all. We have popular brands like Vega , Studds are ISI certified brands in India. If the person rides using the other certified helmets rather then ISI certified means they can be fined from 500 rupees to 5000 rupees accordingly, but if you ride without helmet only 100 just joking 😜. If a seller sells an non-ISI-certified helmets means they will be fined up to 5 lakhs and
Post a Comment
Read more

Why Do You Need to Lubricate Your Motorcycle?

July 09, 2021
Many riders miss the importance of the chain by modifying the other components of the bikes just for looks and some fancy stuffs, so i would like to give first priority to the chains because we unable to ride a bike without the chains, if its ignored or not taken care it may cause a big problem to your motorcycle. Chain lube helps to move the bike smoothly and you can feel it smooth after lubing. Below I have listed some tips to take care of your chain on any type of motor cycle. It doesn’t matter whether you own an older bike, or have a newer, more modern machine, lubrication should be an essential part of your maintenance kit. A dry chain cause bad gear shifting. It reduces the chain noise if it's clean and lubricated. You can save some money when your are taking care of your chains.         I will not recommend or say that this lube is best, but each and every product quality will differ and cost too. When coming to my Royal Enfield Himalayan I use kerosene to clean the chain
1 comment
Read more

The Peripatetic
Hi all, welcome to my blog. I'm a traveler and motorcycle enthusiast.